Our website is made possible by displaying online advertisements to our visitors.
Please consider supporting us by disabling your ad blocker.

A sfx(mini server) can be used to give easy access to a desktop but doesn't allow
you to remote logon/logoff access UAC controled. The mini sfx always require aproval
before you can takeover the desktop. Typical usage: remote support
The server running as service allow full access, typical usage: remote access. 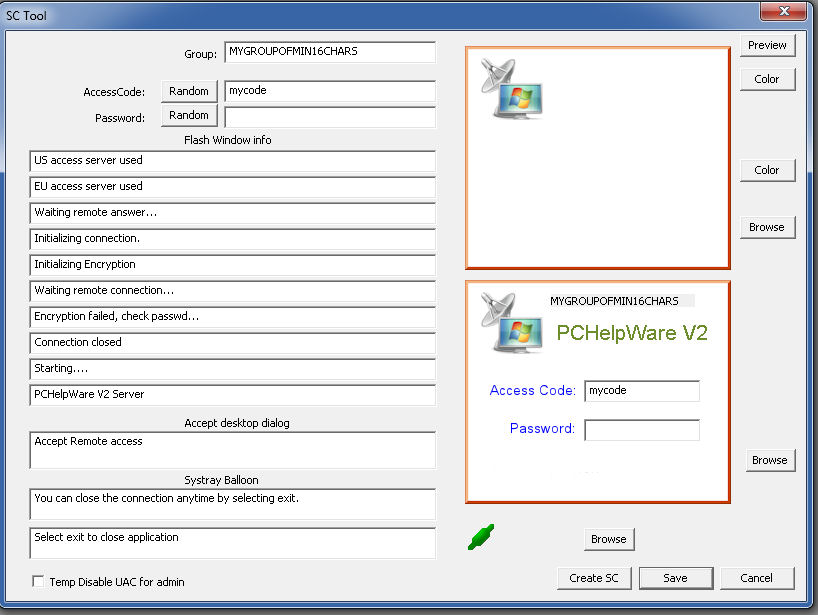 You can modify icons,bitmaps,text...
Use the same group as a group set by the viewer.
You can set a predefined "accesscode" and "access password", the viewer save
the password so you don't have to enter it again on connection.

Create SC button, create a sfx ( saved on the desktop in the pchw subfolder)
If you run the sfx exe, and allow it in the firewall is should be visable like
"Rudi-PC".

If password was not set via SC tool and let the user set it you need to
manual add it first before you can initiate a p2p connection.

A Trayicon balloon indicate connection has been made.

FileTransfer: Is part of the Chat module ( drag and rop files on the window to copy remote)